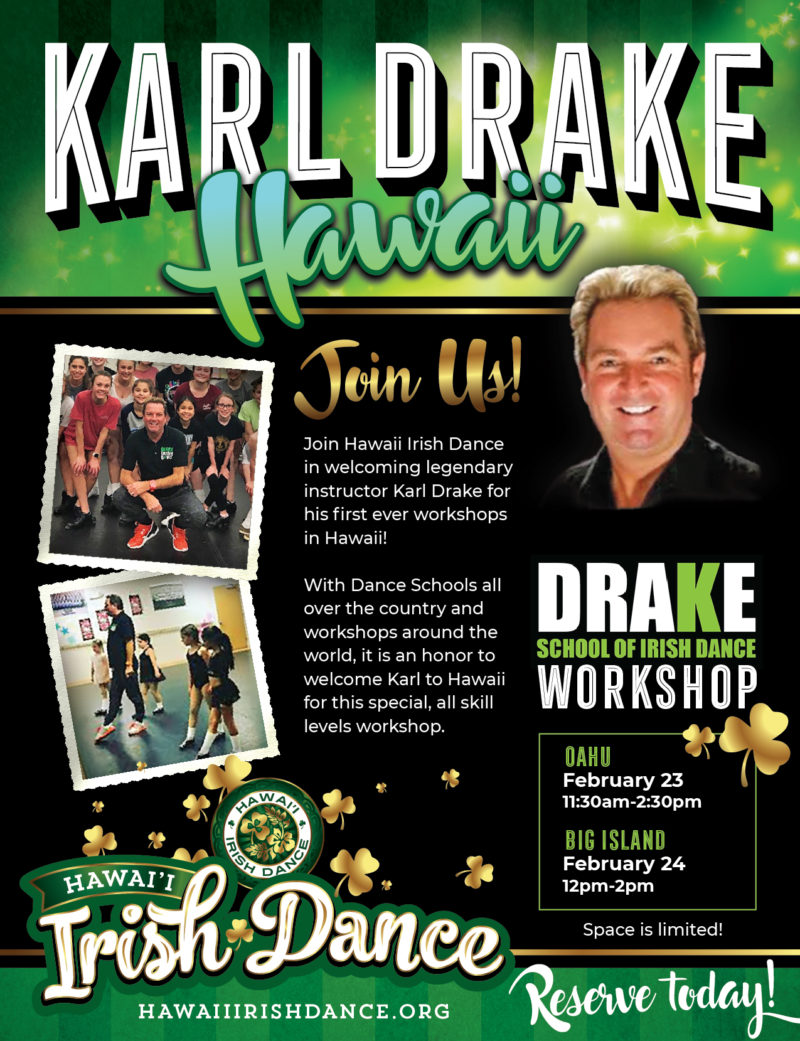 With Dance Schools all over the country and workshops around the world, it is an honor to welcome Karl to Hawaii for this special, all skill levels workshop.

Cost: $70 per dancer, includes FREE unlimited classes with Hawaii Irish Dance for the month on March with workshop fee! Pre-registration is required for this limited space engagement. Please reach out today to reserve your space!

Hailing originally from Dublin, Ireland, Karl Drake, ADCRG is a world renowned Irish Dance master, teacher, and adjudicator. Karl is the director and instructor of Drake Irish Dance in Atlanta, GA and adjudicator with An Coimisiún Le Rincí Gaelacha, the oldest and largest governing body for competitive Irish step dancing. As a competitive dancer, Karl held numerous regional and international titles, including placing 5th at the World Championships. He was the lead dancer and choreographer for Rhythm Dance, The Journey Home, Common Ground, and Celtic Connection. Karl has performed with the Chieftains, the Capital Ballet, and even at the Olympics. He has taught Workshops and Master classes given throughout North America, Europe, Yanling Studios, Beijing, China and most recently at the World Famous Beijing Dance Academy, Beijing, China

Drake Irish Dancers have a record of competitive achievements to include Regional and National Champions as well as World Medal holders and team World Championship titles.

This website uses cookies to improve your experience while you navigate through the website. Out of these cookies, the cookies that are categorized as necessary are stored on your browser as they are essential for the working of basic functionalities of the website. We also use third-party cookies that help us analyze and understand how you use this website. These cookies will be stored in your browser only with your consent. You also have the option to opt-out of these cookies. But opting out of some of these cookies may have an effect on your browsing experience.
Necessary Always Enabled
Necessary cookies are absolutely essential for the website to function properly. This category only includes cookies that ensures basic functionalities and security features of the website. These cookies do not store any personal information.
Non-necessary
Any cookies that may not be particularly necessary for the website to function and is used specifically to collect user personal data via analytics, ads, other embedded contents are termed as non-necessary cookies. It is mandatory to procure user consent prior to running these cookies on your website.
SAVE & ACCEPT